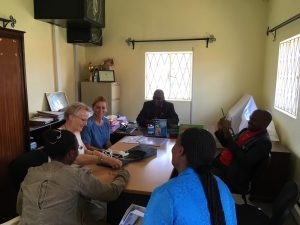 This is Africa (T.I.A.): it is a much expressed cry during our journey when we once again fall from one surprise to the other, but especially when things are just a little different than we expected or planned.

On the first morning after arrival it is immediately hit. Fifteen minutes before the planned meeting with Dr. Wonanji, the Regional Medical Officer of the Arusha district, we have no idea of ​​location, time or schedule. At the last minute an e-mail arrives and we jump in a taxi in order to appear in the office of Dr. Wonanji half an hour late. Ad-hoc a program is conjured up.

Together with Suus from Stichting Driving Nurses we are first informed about the progress of the business plan for the Mamabus. The Mamabus is an outreach service that we want to set up together with various partners and the local health system for the Arusha region. With this we want to make structural pregnancy checks possible for the population in the rural and poorly accessible areas of northern Tanzania. We want to contribute to reducing the high maternal and child mortality in this area.

The emphasis of the Mount Meru Foundation is of course on the implementation of ultrasound during maternity checks on the Mamabus. We demonstrate the operation of the Lumify from Philips, a mobile echo application consisting of a probe and a Samsung tablet. The Lumify was financially made possible by star-shl. With the device, the remote echo investigation can be followed live via a mobile network. Images can be sent safely to a center of expertise in just a few minutes at the push of a button. This telecommunications application is received with enthusiasm. After all, it offers possibilities for a second opinion, consultation and supervision from a distance. This fits perfectly into the direction of Dr. Wonanij and his team, in which there is plenty of experimenting with mHealth applications to tackle the health problems in this vast region.

Next stop is the Mount Meru hospital, where we visit our project from last year. Just walking into a hospital and looking around is not there; First we have to go to the Clinical Officer in Charge. Where he lives is a large brown desk, with a picture of Prime Minister on the wall and a book on the table that absolutely must be signed. It is the first of many brown desks we will see and the first of many books that we will draw. Time and again we explain our mission. We are pleased to see that the ultrasound device that the Mount Meru Foundation was able to donate last year with the help of all generous donors is in full use. This is also evident from the figures. It is also nice to see that different lab technicians are being trained to make echoes. The train-the-trainer model that we presented last year has clearly gained a foothold!

Then we step into the official car and we will spend two days in all corners of the districts of Longido and Nduruma. The trip is totally improvised - This is Africa - but oh so meaningful. Dr. Wonanji does his utmost to give us a good idea of ​​the possibilities and challenges in the area. We get a good impression of what is currently available on health care. We visit large and small medical aid stations where we talk to the emergency services. We hear about the number of pregnant women they see, the number of births, the availability and supply, the problems related to staff and housing and the large number of people who are designated for care at the often summarily equipped health posts. Although every medical post turns out to have its own problems, the accessibility and the rainy season are mainly referred to as obstacles. Pregnant women sometimes have to walk three hours to get a post pregnancy check, and then three hours back. Then of course they do not come along often. 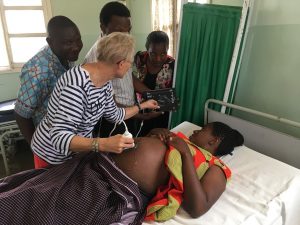 We bump over endless dusty dirt roads to the most remote areas, even to the border with Kenya. More than ever we realize what the added value of mobile ultrasound is, especially in these areas. The fact that we can easily transform an echo device from a handbag provides the necessary magical moments along the way. For example, when a Maasai woman at a health post is supposed to be 23 weeks pregnant, but she turns out to be around 30 to 32 weeks if we let go of our echo measurements. No wonder that this woman had already delivered "unexpectedly" at home four times before. Measuring is knowing. And what was she delighted to hear that it would be a boy!

On the way we often fall from one surprise to another. For example when we encounter a hospital that is equipped with a brand new operating room that is not operational. The necessary staff is present, but the operating table is still in a wooden box and the further equipment is missing. The pharmacy is large, but almost empty, and many people are in line for medication. Resources are spent very special here. Clearly to the displeasure of the Regional Medical Officer, who immediately appeals to those responsible for this procedure. T.I.A!

This is Africa
FacebookTweet